Hindi lang sa mga celebrity uso ang pagtawid bakod from their previous TV network to another. This phenomenon also happens even with the serious people of News and Public Affairs: Mel Tiangco, transffered from ABS to GMA News. Erwin Tulfo from ABS to TV5, Aljo Bendijo from ABS to IBC 13, Karen Davila from GMA to ABS, Cheryl Cossim from ABS to TV5, and more. Considering these cases, it is not surprising to know what Al Hadjie Rieta did.
Al Hadjie Rieta is a former News Anchor of TV Patrol Laoag of ABS-CBN Northern Luzon. I met Al Hadj at the 1st I-witness Docuseminar held in SM Megamall on 2008 when he was still a student of Mass Communication in Northwestern University. Undeniably, he is a smart, dynamic and a proactive person.

I can remember him talking to almost everybody in the event. He was very active with the discussions and activities prepared by the I-witness hosts. I can see his energy and passion towards news and public affairs, that’s why I wasn’t surprised when one day I saw him on a regional TV doing a live news telecast.

On an interview with Media Newser Philippines, a leading weblog delivering news and opinions about the Philippine TV News industry, Al Hadj said that GMA had offered him an oppurtunity to be a national reporter. He said,

“I transferred to GMA-7 because there was an opportunity for me to be a national reporter. Lahat naman pangarap ito kaya when I learned na puwede I grabbed it already. ABS-CBN did offered me a national job, but I have to wait, eh ang GMA-7 ito na inaantay lang ako na mag-yes.”

He mentioned that he initially tried to apply in GMA News before, so as I supposed, it wasn’t really difficult for him to accept the offer since it appeared technically that his first preferrence is to work with Kapuso Network. His facebook became clamoured with different opinions from his “followers” about his decision in changing his news tribe. One of them posted,

When he was asked about working with the rival network ABS, he said, 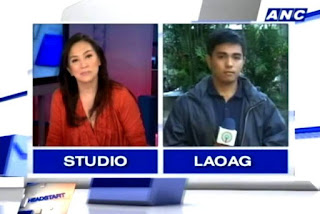 Personally, I don’t see anything wrong here. Transffering to a rival company is often normal to any industry, not unless you’ve signed an agreement with your employer and promised not to do it for certain period after leaving them. As one of the young individuals in the news and public affairs industry, it is still better to get the opportunity while it lasts. The “utang na loob” thing from the people who had helped you gain more knowledge and skills to do the job better should not be an objectional reason to accomplish higher goal and to step up.Afterall I think, Al hadj did his job very well while he’s in the fences of  ABS-CBN, so the Kapamilya news team has nothing to object on his choice of leaving from what he can consider as training ground in the actual field.
He added on my interview:

Hadjie Rieta envisions to be a part of the I-witness team in the next 5 years. His network debut at GMA Network happened last Friday, June 24 at 24 Oras. You can also see him on other GMA Newscast such as Balitanghali on NewsTV.
To hadjie, goodluck to your new endeavor and more power ka-Iwit! =)