One of the hippest and coolest sensations today is here on MgaDakilangAraw! 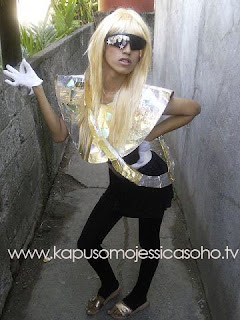 THE PARODY AND THE LEGEND
It’s so humbling to know that despite of his schedule, YouTube phenomenon Vinzon Leojay Booc, much well known as Lady Gagita was able to answer my few questions this morning. Born in the city of Davao, this Mass Communication student is able to entertain the new generation with his unique charm by creating and posting parody videos of his hollywood glam rock idol Lady Gaga via YouTube. And take note, those videos are not another set of ordinary trying hard make-funny-for-online-popularity parodies BUT are highly creative and hilarious footages!
THE TELEPHONE SENSATION
I am one of those people who unstoppably got a LOL factor when I initially saw his ever famous video Telephone shared by one of my classmates on Facebook. Its really a huge and entertaining laugh trip particulary when I learned that the entire parody was made out from over-here-and-over-there crap and the performance, continuity and specially the editing are so so so impressive! Not mentioning the production design that visually tells the reality of most us. Vinzon started posting home-made videos on his YouTube channel vinzonleojay2009 mid-year of 2009. That time he was trying to imitate Beyonce, singer of the hit single Single Lady. Though he had some previous print media exposures such as in Philippine Star right after a few weeks of uploading the Telephone Parody, Vinzon’s first tv appearance on Kapuso Mo Jessica Sojo (GMA 7) became like the official start and a go signal for his showbiz career. By then, along with Haronce (Harold in real life) began guesting to several TV shows on GMA 7 which made them decide to stay in Manila for a while. Pictorials, attending events, media interviews, shootings and a little bit of furlough are just a few things that keep him and Haronce busy nowadays.
A BRIEF ONLINE ENCOUNTER TO THE MONSTER 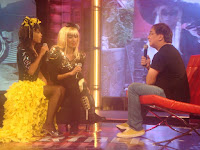 How are you today? How’s your schedule doing?

-I’m fine. Great. Getting ready for tomorrow’s shoot for the mysterious secret video before Paparazzi’s release.

Out of all hollywood pop stars, what makes you decide to impersonate Lady Gaga? How did it change your life?

-Actually, I decided to become Lady Gaga when I was really hopeless being a Beyonce impersonator, which was not really recognized indeed. I shifted on becoming Lady Gaga who stunned me because of her fashion sense, so I decided to be her. She changed my life with a wink of an eye, and with my effort too.

There are lots of parody makers and YouTube sensations on the internet particularly on the local scene, what do you think is the main reason why your MV Telephone became popular? How do you separate you music videos from the rest?

-The reason why my video was unique with the others, is because of its Pinoy taste, where I really used the method of being resourceful and using the power of improvisation. Most parodies on Youtube changed their lyrics and used hi-tech equipment, which is in contrast with my video. 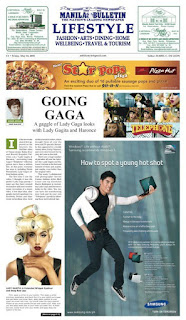 Speaking of your Telephone Parody, how long did it take for you to complete the video? How much did you spend for it?

Its seems that you are starting to feel the reality of showbiz since youre beginning to have tv exposures, photo shoots and some controversies (i think), how do you handle these?

-Rarely shocked! Those stuff were really new to me right now. I may not handle this status because of my immaturity in the world of showbiz, but some advices im receiving from my showbiz friends urge me to earn more determination.

I think you’ve already heard about the “anti-lady gagita fb page”, what can you say about that? What can you say to those peeps out there who try to question your identity as impersonater?

-I’m glad they made it, because they are just making me more popular. I even asked myself why would this dudes hate me for becoming an impersonator which they know that I’m only a parody maker?

What are your future plans? Are going to pursue your career today or get on studies first?

-As for now, I sacrificed the coming semester for my showbiz career. But on the next semester, im planning to go straight back to Davao to continue my study.

hat do your parents have to say about the phenomenon you created?

-They were speechless. They didn’t expect that my craziness would lead me to showbizness. Actually, they don’t really like what I’m doing. But then the promise (my goal to become a star) I told them was now granted.

Can you give me the hardest, as in super hardest part of being a Lady Gagita? How about the happiest part?

-The hardest part of being Gagita: the wigs, the make-ups and the whole disguise. The happiest part: Being a well-known Youtube star.

-Love takes time, it doesn’t need to be in a hurry. Crush is an attraction at first sight.

Can you give me one surprising secret that you havent told on any of your interviews or appearances?

-The next video (before Paparazzi) I’m releasing is very mysterious as of now. Thus, many fans are asking what is it, and it is “Teeth.”

Just like what he said, Lady Gagita is currently working on his next projects including the upcoming music video TEETH. Though he still waiting and wishing for a chance to meet the real mother monster of hollywood, we will still be entertained by the glam and wit he’s giving. And while his Telephone Parody is now earning an amazing 2 million views to date, Lady Gagita with Haronce, is a proof and a benchmark that Filipino talent, creativity and resourcefulness is worth recognizing and a story to be told.
————————————-
Photos courtesy of Vinzon Leojay Booc.
Minor edits considered. Watch their first viral parody here!

3 Comments on ““RARELY SHOCKED!” An Interview With Lady Gagita”