Gotta Kill Them All.. JEJEMON!

1) Usually seen around social networking sites such as Friendster and Multiply, jejemons are individuals with low IQs who spread around their idiocy on the web by tYpFing LyK diZS jejejeje, making all people viewing their profile raise their eyebrows out of annoyance. Normal people like you and me must take a Bachelor of Arts in Jejetyping in order to understand said individuals, as deciphering their text would cause a lot of frustration and hair pulling.CAUTION: THESE INDIVIDUALS ARE BREEDING! THEY CAN BE SEEN WRECKING GRAMMATICAL HAVOC ON FACEBOOK TOO!2) Jejemons are not just confined to trying-hard Filipino gangsters and emos. A Jejemon can also include a variety of Latino-Hispanic fags who enjoy typing “jejejejeje” in a wider context, much to the disdain of their opponents in an internet MMORPG game such as Ragnarok and DOTA.

3) Basically anyone with a low tolerance in correct punctuation, syntax and grammar. Jejemons are usually hated or hunted down by Jejebusters or the grammar nazi to eradicate their grammatical ways.

You: You are a jejemon! Don’t talk to me, you uneducated retard!

– a person WhO tyPeZ lYKeS tH1s pfOuh..
whether you are RICH, MIDDLE CLASS or POOR ifpK eU tYpE L1K3 tHiS pfOuh..eU are CONSIDERED AS JEJEMON.- (noun or adj.)—a person who is very expert in typing..
– a person that nevr gets tired of typing consonants in all of his comments…
– people with very LOW IQ
– a person that destroys the morale of language in any typing media like internet,cellphones…etc…
– a person you want to fuck off and kill
– an emo/gangster who owns all the possible negative qualities of a person.- is the derrogative term used for a certain categorized kind of people.They type JEJEJE or JEJEJE when they want to express laughing in written words, which happen more than often. This is why we call them jejes.
JEJE-Similar to hehehe but more like a naughty chuckle coming from the back of your throat.
For instance, used while plotting an evil plan.EX. 1. I’m going to make that guy look like such a zaris..JEJEJEex. 2. “omg! my sister farted” jejeje
ex. 3. 3Ohw phOwh eVeR1yBhOodY! jejeje!
ex. 4. pFroUwd 2 b @ jEJ3mOn!

WHAT ARE THE SIGNS OF JEJEMON PEOPLE?

Sign that it is a jeje you are dealing with is that he (they are most commonly masculine) seems to have low intelligence.
This is because
1. they can not express themselves in the English language as good as an average person
2. it seems that their kind is simply dumber.
3. Their names are also often begun with “El” then followed with a random spanish or portuguese word.
4. they put too much letters and symbols in everyword they say even in their god damn NAMES or ALYASES. 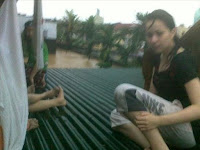 A pejorative term most middle to high-class Filipino teens use to refer to their poor countrymen who dress up as ‘GaNgZtaHz’ and use txt language. What the upper class fail to see is that these Jejemons do not know any better and that’s caused by their inherent poverty.The elite and affluent, not to mention spoiled teens find yet another way to degrade their already impoverished brethren. Instead of helping the trampled, the high-class Filipino teens jeer at the destitute who they know can’t afford the luxurious taste they have. Of course, they cover this up by volunteering in charitable works just to show that they are impeccable and far better than the so-called Jejemons.This just goes to show how divided the Filipino people are. Social classes will never break boundaries because the discriminatory elites will never accept the poor in their society as equals.
Rich boy: Hey look! A Jejemon! Look at how he types and dresses.
Rich girl: Yeah, it’s a good thing we have rich parents. Hey, let’s go to Zara, Mango and Topshop, I wanna buy gladiator sandals.
Rick boy: You already have about 20 pairs!
Rich girl: Look at that disgusting Jejemon…He’s been looking at me the whole time.
Rich boy: That’s ‘coz you’re wearing short shorts and exposing your shaved mestiza legs. But I don’t really mind.
Straight from GMA News and Public Affairs: For the latest Philippine news stories and videos, visit GMANews.TV
Pero in short, kung JEJEMON ka man o hindi, wala akong pakialam. Patuloy pa rin ang climate change.
PS: “Pababalikin ko ang mga Jejemon sa elementarya.” -GIBO
For more info, visit http://jejemon.com/